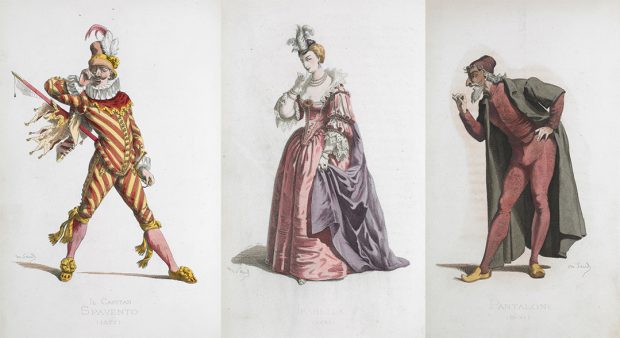 What is Commedia Dell’Arte?

Originating in Renaissance Italy, but achieving popularity across Europe, Commedia Dell’Arte is a special type of improvised comedy.

Troupes of Italian players may have travelled through London in the 16th century, and Shakespeare drew on the tradition in comedies such as Twelfth Night, The Taming of the Shrew, As You Like It and The Tempest.

In 2017, it also came to Thurrock thanks to the Complete Commedia Company and Thurrock 100 Tales!

Take a look at the programme for 2020 HERE

Arlecchino
The chatty, acrobatic servant; an anarchic, brilliant schemer who unwittingly complicates, exacerbates and infuriates those he is supposed to help.

Il Dottore
The waffling, boffin; an intellectual windbag; an ineffectual father and master; why use one word when ten will do?

Il Capitano
The pretentious, self-promoting braggart; extravagant and sonorous; ridiculous and cowardly; he boasts of his imaginary conquests at war. Fancies himself as a winner with the women.

Pulcinella.
The quarrelsome, belligerent, servant; a loner; he has a fatalistic philosophy and takes great pleasure in violence.

Colombina
The captivating lady’s maid; coquettish and clever; she manages the plot with wit and benevolence; adored by everyone.